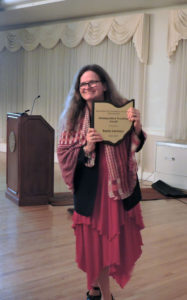 Lawrence, a full professor in the college’s Department of Mathematics, said she has taught for 22 years – 15 of those at Marshall University. Lawrence describes her teaching style with two words: “self-discovery.”

“When I teach, I try to guide my students to their own self-discovery and get them to that ‘Ah-ha!’ point in their education,” Lawrence said. “It is such an honor to have received this award for something I love doing. I am so blessed to have the full support of my department behind me and could not do what I do without my colleagues and the students who motivate me.”

Among the faculty in her department, Lawrence is considered to have been the driving force to build Marshall University’s mechanical differential analyzer. Dr. David Cusick, professor of mathematics at Marshall, said this machine provides visual interpretations for students so they can solve a differential equation and become the “calculator” to develop a better understanding of mathematical concepts.

Cusick said he nominated Lawrence for this award due to her commitment to enhance mathematical thinking within her curriculum.

“Dr. Lawrence is an outstanding teacher in the fullest sense. Her standards are high, her students love her and she has been a co-author on an advanced textbook,” Cusick said. “However, her towering uniqueness comes from the differential analyzer.  This is a reconstruction of machines from the 1930’s through World War II. Those machines were a part of the Allies’ victory over the Axis. Thanks to her efforts, Marshall University has the only publicly-viewable machine east of the Mississippi, or maybe anywhere.”

The Mathematical Association of America is one of the two national professional societies for college-level mathematics in the United States. It has over 14,000 active members in 29 sections with Marshall University as  a member of the Ohio section.

After receiving regional recognition, Lawrence is now a candidate for the association’s national teaching award. To learn more about Lawrence’s work in the Department of Mathematics, contact her at lawrence@marshall.edu or visit www.marshall.edu/cos online.